With three year EV experience I decided that I’m ready for the next step. A daily drivable EV. What else could it be than a Tesla. 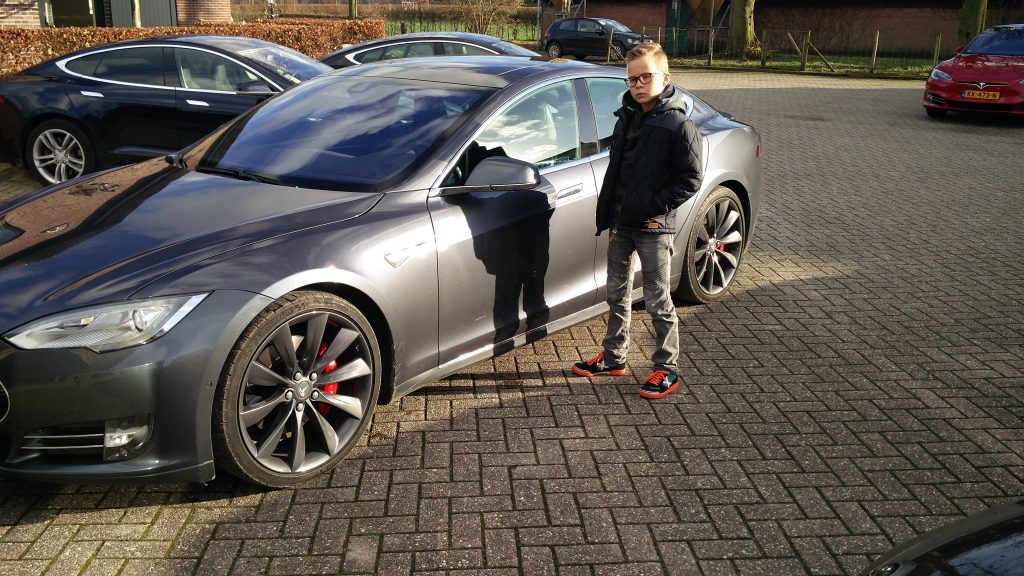 Just before the end of December the Lotus has been sold. I hope I won’t regret it. I definitely will miss the way it drives.

I found a 2010 Golf Variant which had an E-license. This Golf is one of 45 build by ECE, the same company which converted the Lotus to EV. Unfortunately al the EV part where removed. So basically we bought a body with a registration number (licenseplate).

I contacted my EV repairshop if they could restore the car with original parts. I everything goed as planned the Golf will run end of January 2018 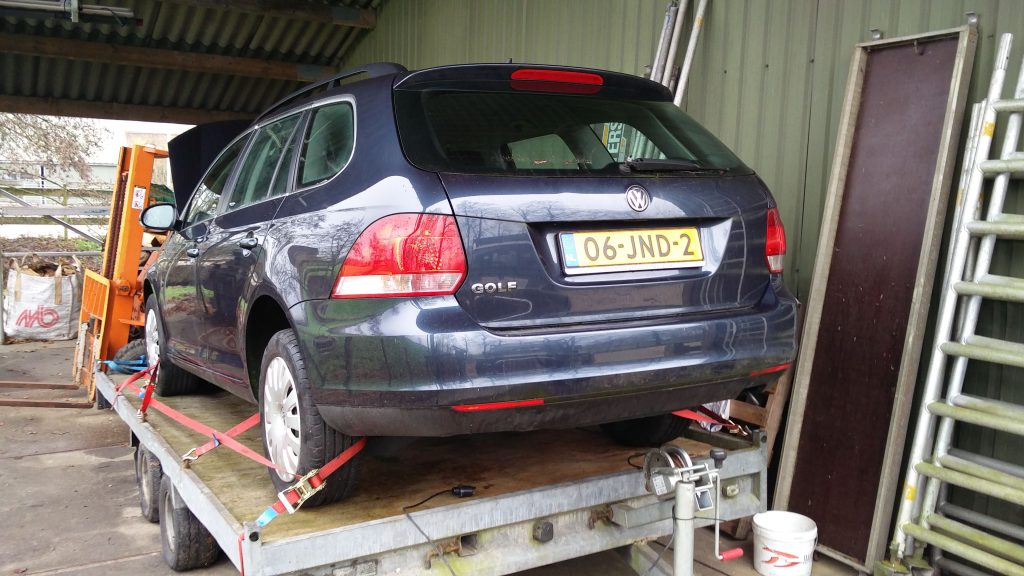 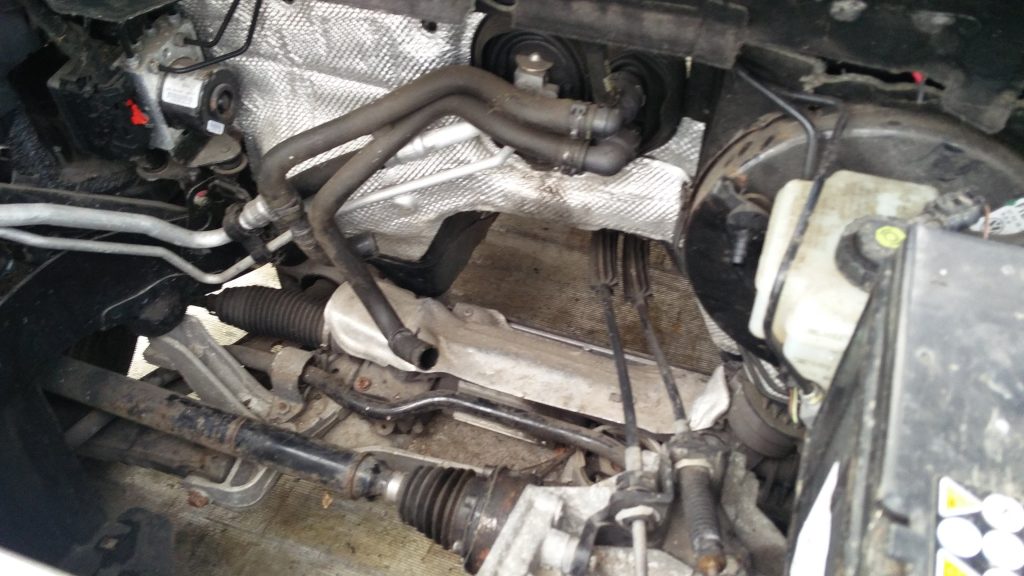 So far I wasn’t able to fast charge my test pack. First I thought it had to do with fact that the JLD505 wiring was somewhat different than the schematic in the ChaDeMo Kit Manual because it has been used in a Zero motorcycle. The logging showed that the High voltage contactor was closed and that the EVSE supplied a high voltage. But after a few seconds the voltage rose to the max battery voltage set in the JLD505 and the EVSE stopped the charging process. Based on the ChaDeMo charging sequence flowchart I came to the conclusion that the JLD505 is working fine. But the test pack is probably causing problems. The test pack has old batteries from an UPS and they weren’t designed for fast charging. 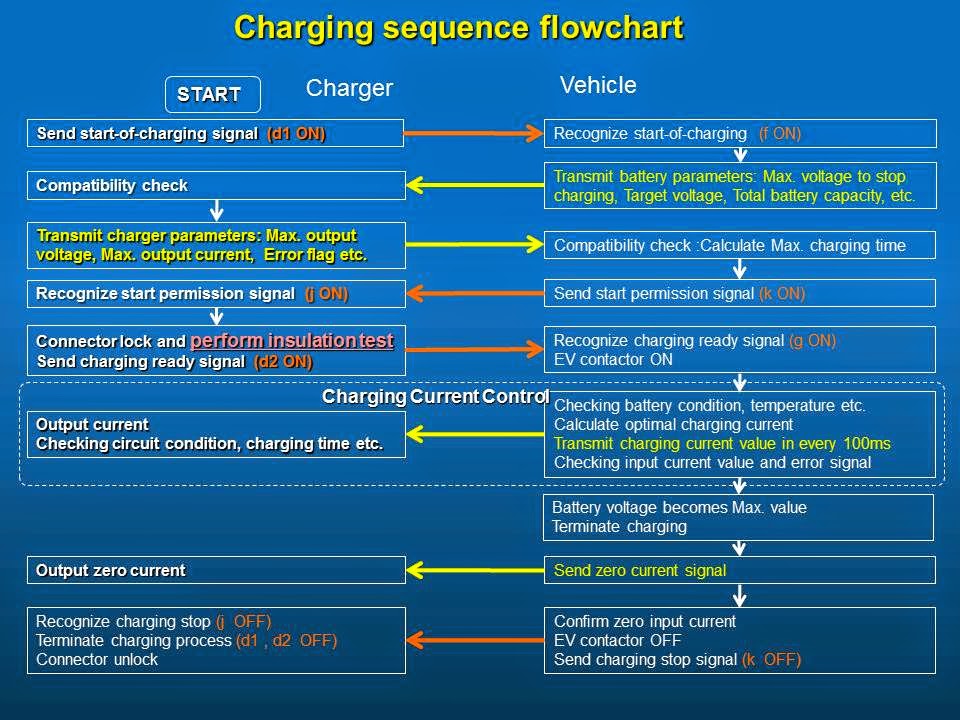 The amount of regeneration can be adjusted by supplying a voltage between 0 – 5V to the PEU. ECE decided to fix the voltage, at a safe level, with two resitors (2K2 and 3K3). I want to be able to adjust the regen,. E.g. in rainy conditions reduce the regen and in summer when using the Yokohama’s A048 increase the regen. I did some testing and it is unbelievable how much braking force is available when set to full regeneration. 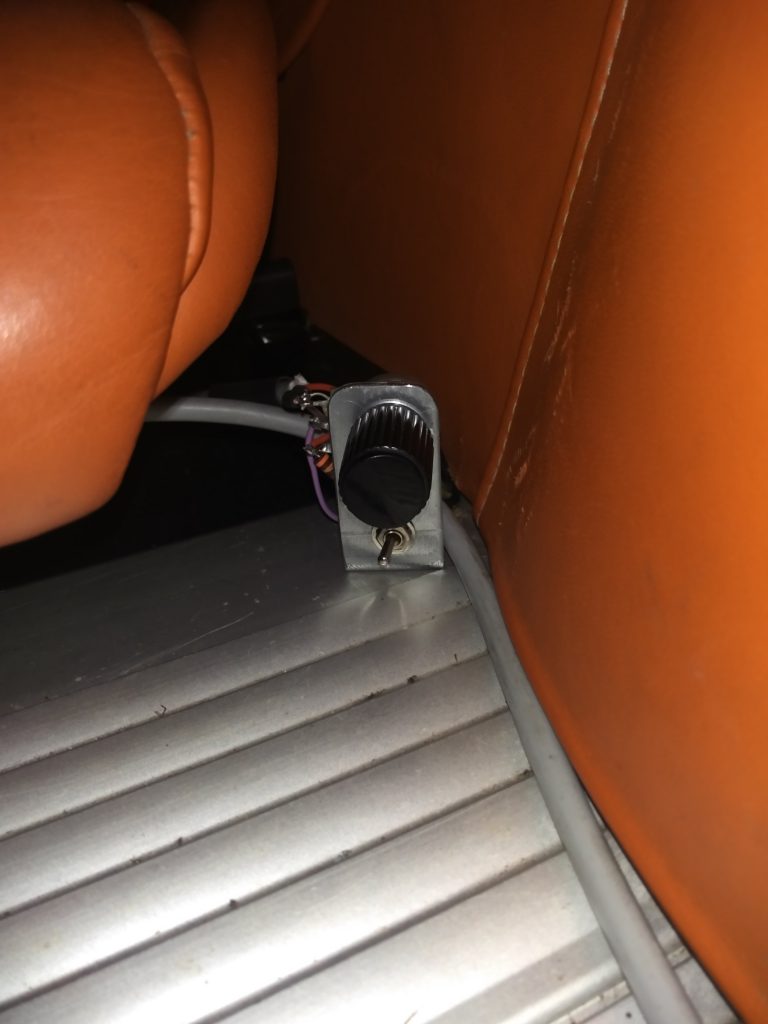 After a few weeks driving in rainy conditions the car didn’t start charging when pluged in. First it whould start charging after a few un-pulg and plug cylcles. But last week it wouldn’t charge at all. 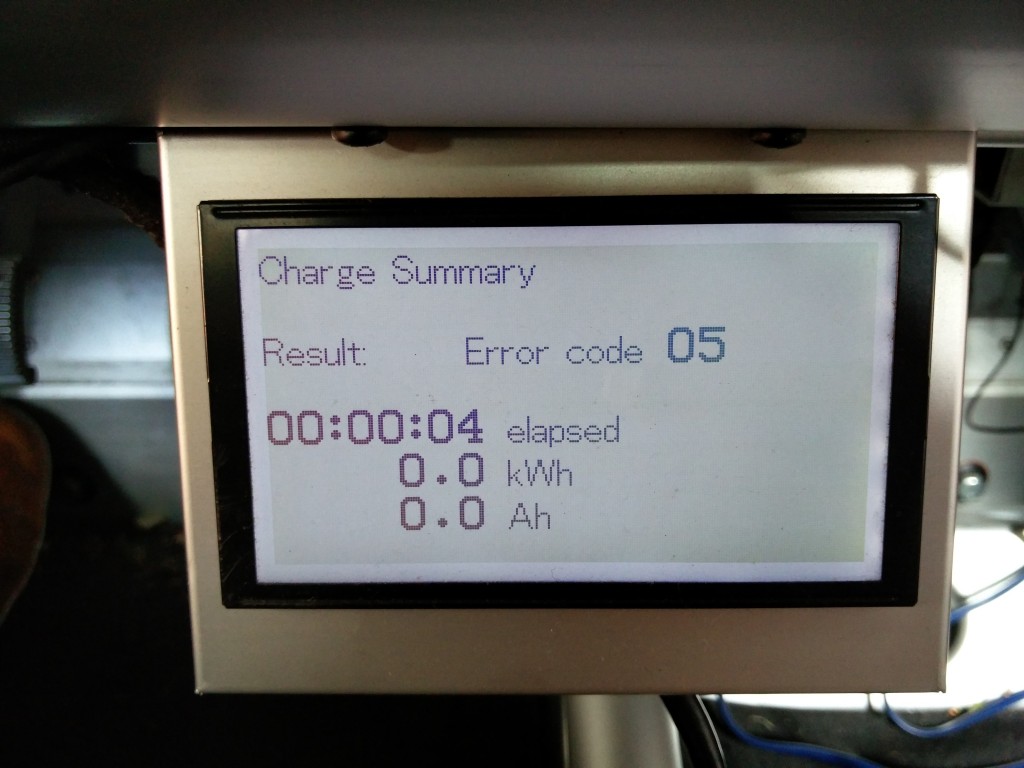 Using the PEU Utility to read the error from the PEU. 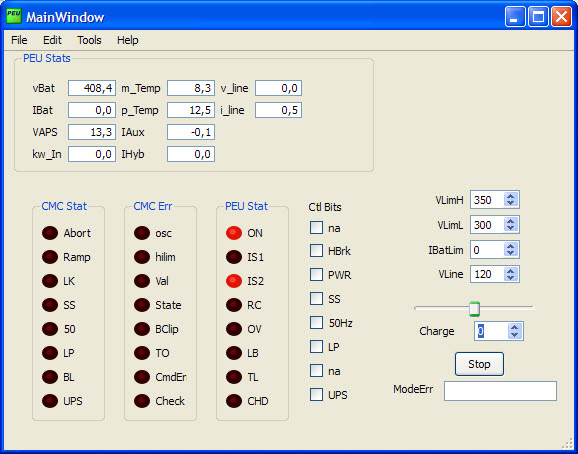 PEU Stat shows IS2, IS2 Means that there is an isolation problem with the battery, e..g if the battery isn’t floating.

This can be tested with te following procedure

1. Connect 100 K-ohm resistor from battery (+) terminal to chassis
and measure voltage across resistor. Caution: resistor may get hot.

2. Reconnect 100 K-ohm resistor from battery (-) terminal to chassis and measure voltage across resistor. Caution: resistor may get hot.

If the propulsion battery is truly floating with respect to chassis, the voltage across the resistor should be near zero in each of the two above tests.

The first test was good but the second failed, there was a negative voltage of 94 Volt between the Minus Terminal of the battery and the chassis.

I disconnected all battery packs and measured them one by one. On the last one, the one with the negitave terminal connected to the PEU, I measured again 94 Volt.

It turned out to be corrosion in the main connector of the PEU. 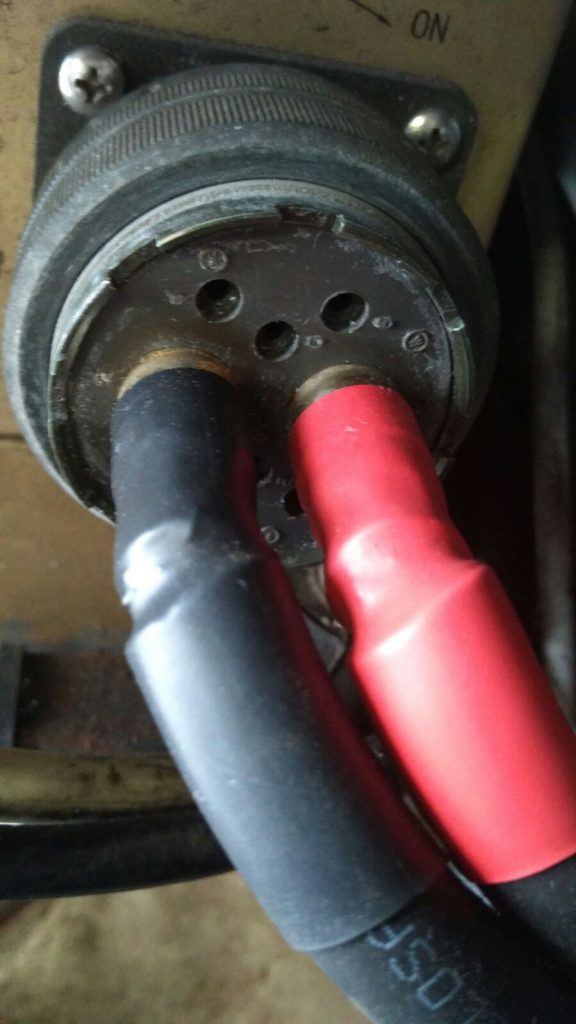 Totday I went for a test drive in a 2010 Volvo V50. The V50 was converted by All Green Vehicles (AGV) for a Dutch project “Rotterdam test electisch rijden“. I was surprised by the build quality. AGV did a very nice job in integrating the electric system into the Volvo. 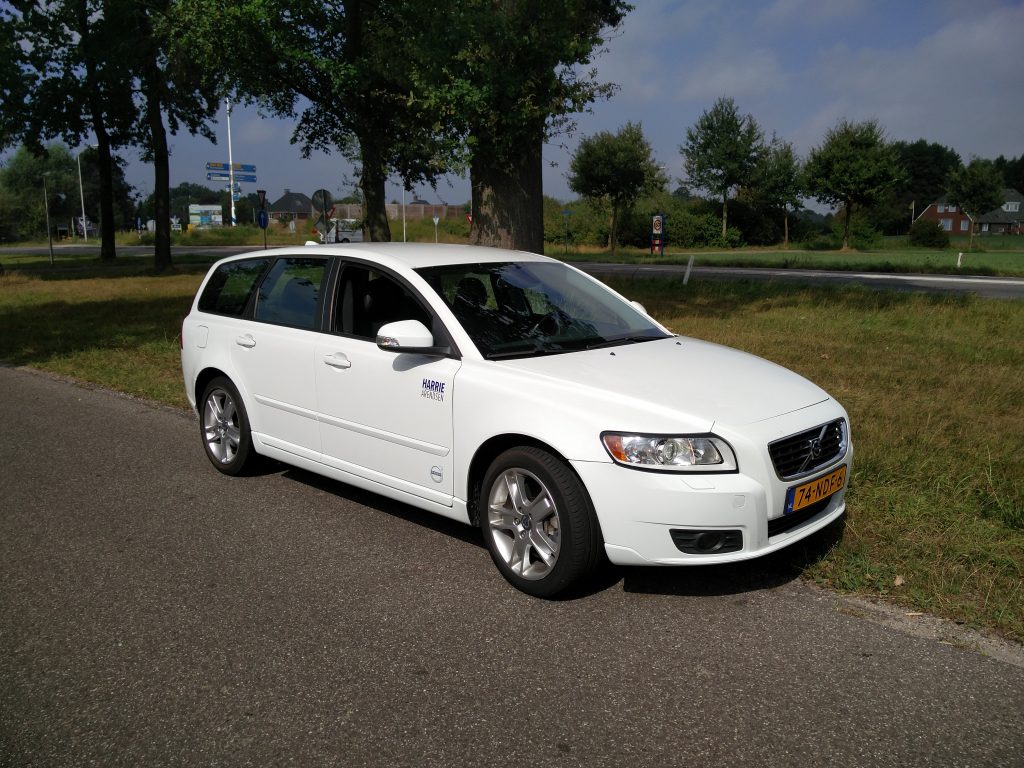 The interior is almost unchanged, the gauges in the instrument cluster are replaced with AGV designed gauges. They look like OEM. 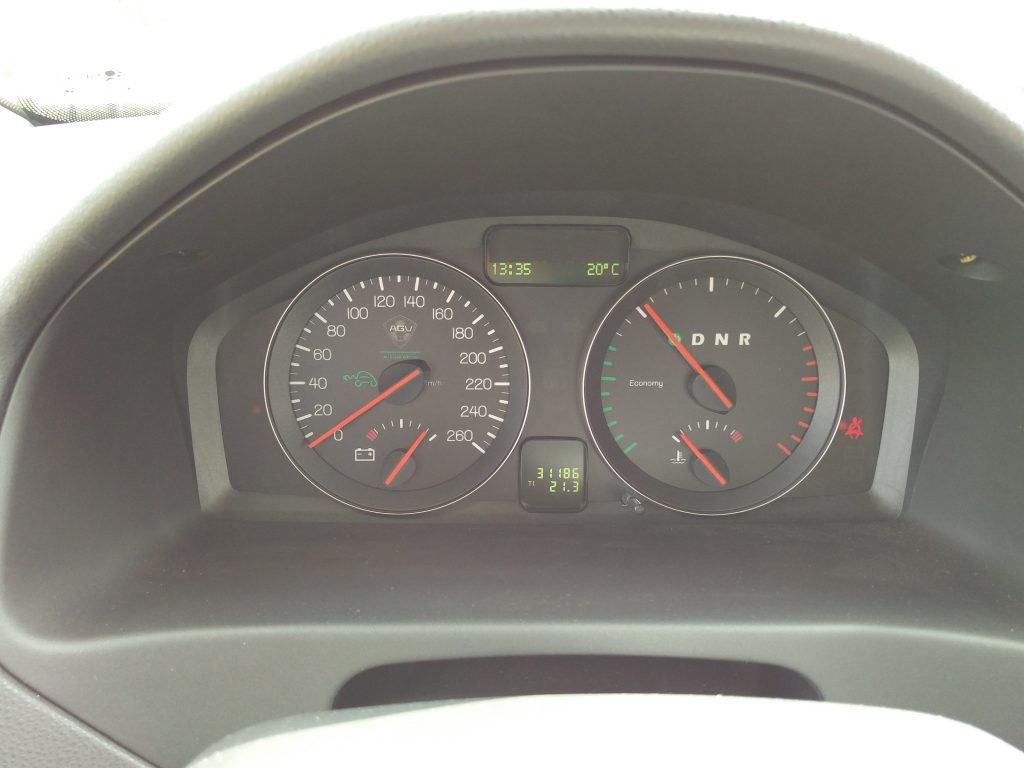 Only two things didn’t work, the cruise control and the board computer. The clutchpedal has been removed.  Under the hood many thinks changed. 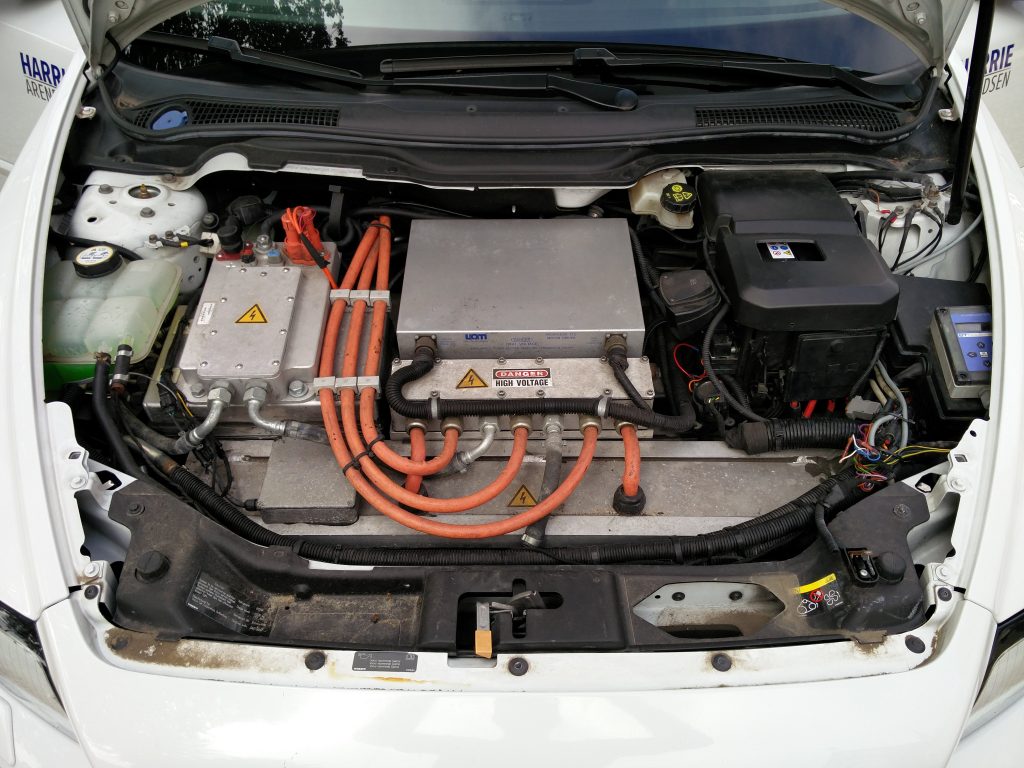 From left to right, UQM DC DC converter, UQM SR218 controller. In front there is part of the batteries. 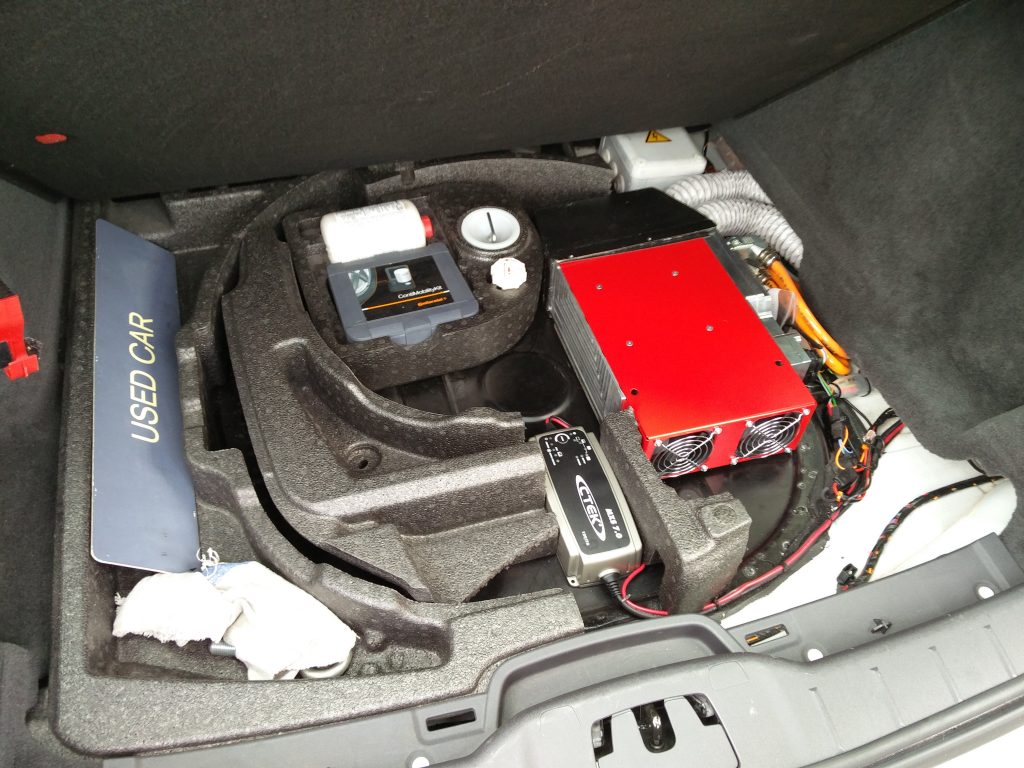 Tripod plunging joints consists of a central drive part or tripod. This has three trunnion fitted with spherical rollers on needle bearings and an outer housing (sometimes called a tulip because if its three-lobed, flower-like appearance). On some tripod joints, the outer housing is closed, meaning the roller tracks are totally enclosed within it. On others, the tulip is open and the roller tracks are machined out of the housing. 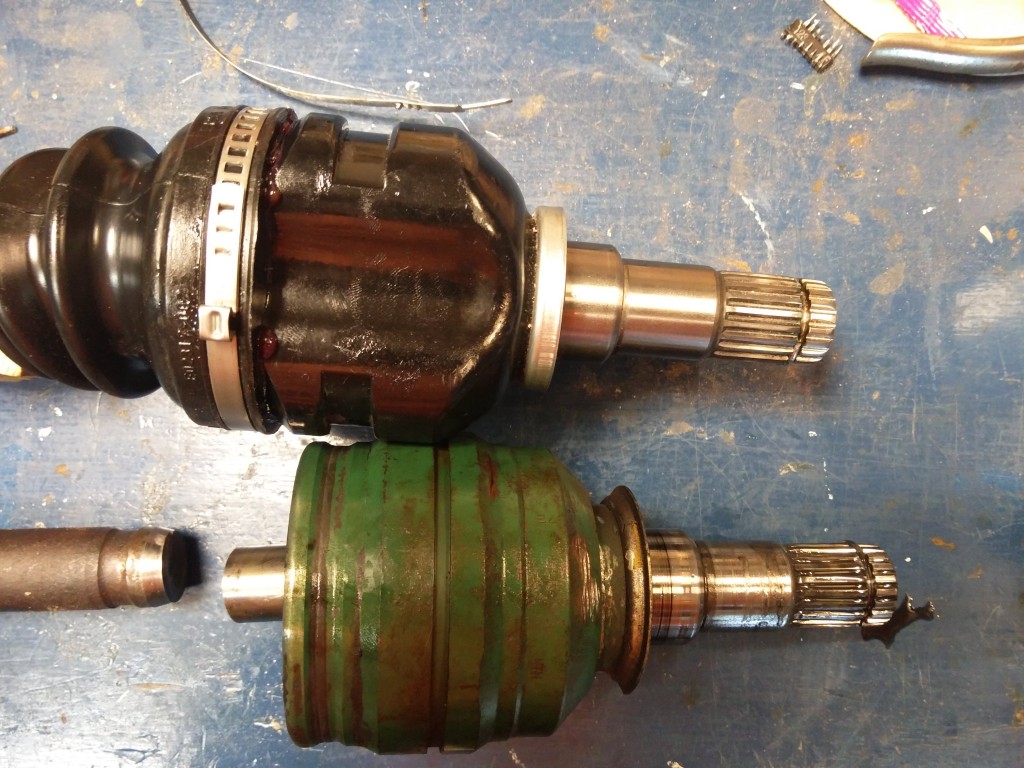 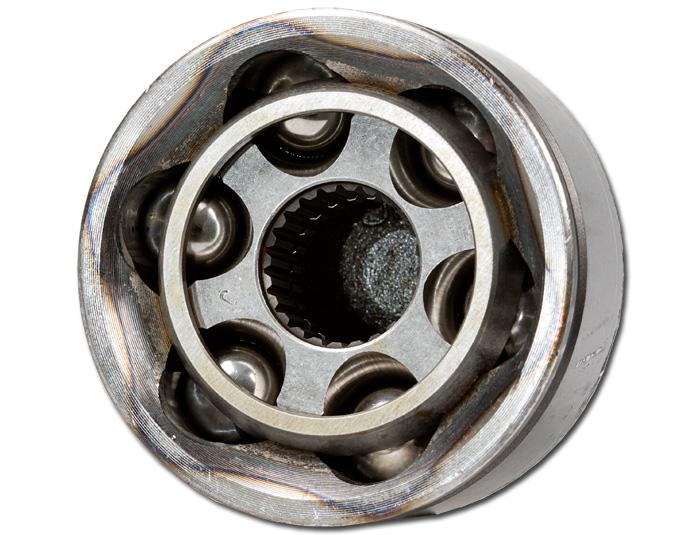 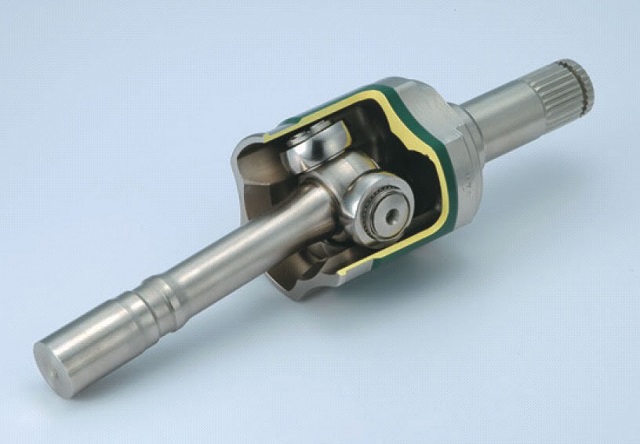